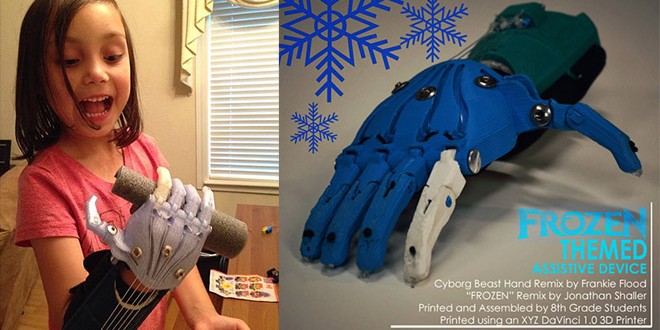 Jonathan Shaller is a British video games artist with over a decade of experience. He is a member of the E-Nable organisation and assist in the creation of 3D printed Childrens prosphetics. He did worked on titles ranging from Call Of Duty, The Transformers, Angry Birds, and more.

In this post you will see E-Nable Prosthetics Part 2 – Aria – 3D Printing by Jonathan Shaller.

Aria was actually was Jonathan’s first project with SFRobotics. Layout was determined in Maya and all the assets were merged down with Dynamesh. As more projects were developed ZBrush took care of more jobs than just dynameshing. Later MatchMaker, & slicing came into play. Jonathan Shaller shared his experience with zbrushtuts.com. He says:

“I’ve had the pleasure of being part of the E-Nable organisation and consider my collaboration with SFRobotics as a proud achievement. Soon after joining E-Nable I was contacted by Peter Graven, headmaster of the robotics class in Wisconsin. Working together albeit a distance apart, we added a personal touch to each gauntlet. ZBrush was a pivotal tool that allowed me to create the various designs that were requested by each child recipient. Anything from Disney’s Frozen, Sporting heroes, to a Spiderman design. Once the files are done. The class of SFRobitics take over and print and assemble the prosthetic. Its no simple task. What they do is very inspiring. It feels good to give something back.” Class of SFRobotics assembling the gauntlet.