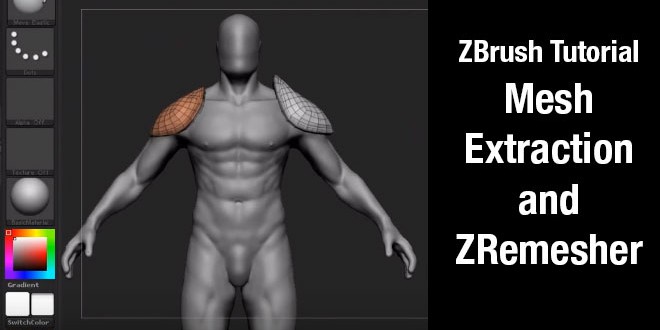 In this post you will see ZBrush Tutorial – Mesh Extraction and ZRemesher by Brad Hammond.

Brad Hammond is a Melbourne based creative technologist, with a body of work and experiments that explore the human relationship with the world of technology and it’s effect on our humanity. His keen interest in science, perception and digital biomimetics has fueled his investigations into the interaction between the natural and and digital worlds.

Brad’s portfolio encompasses a wide variety of mediums including digital interactive experiences, projection mapped installations, experimental digital sculpture, generative art and exhibitions. This varied approach to arts practice and commercial applications is driven by a futurist curiosity and a desire to understand how best to evolve alongside the technology that we as humans create.

In 2012 Brad co-founded Ethno Tekh with Chris Vik. Ethno Tekh was founded on a philosophy of evolving and sharing new forms of expressive human/digital interactions. Since the inception of Ethno Tekh they have exhibited works around the world including CeBit Germany 2013, Pause Fest Perth 2011 – 2013, Dark Mofo Hobart 2013 and Republika Fest Croatia 2013.