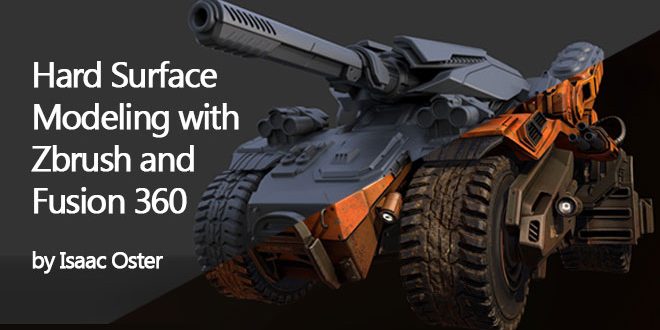 Hard Surface Modeling with Zbrush and Fusion 360 by Isaac Oster

Hard Surface Modeling with Zbrush and Fusion 360 by Isaac Oster

ISAAC OSTER is a Character Artist – Certain Affinity from Austin, Tx, United States of America. Its a blending ZBrush and Fusion on a challenging high poly model.

Isaac started by blocking out the main forms in Zbrush. He used both dynamesh and zmodeler to build these basic shapes.

This is pretty good example of the process. Isaac usually begin with dynamesh, clip, and transpose, then retop, and finish with zmodeler to add any additional detail.

Here are a few examples of a few of the pieces before and after the Fusion pass. Check out the video for a more in-depth look.

Here’s a few more progress shots. Isaac continued tweaking proportions right up to the end of the modeling process.

Isaac did the retop in zbrush.

Isaac did the main UV unwrap with 3DS Max, packed them with UV Layout, and set up the edge smoothing in Maya. Textures were baked out at 4k x 8k. He reduced the the texel density for areas of the model with less visibility.

This is the final albedo map, without decals. Most of this was created with Quixel. Isaac added the orange stripes with a vertical gradient as a separate operation in photoshop.

Isaac made a decal sheet and turned it into a bunch of decals in max. Each material was a different color.