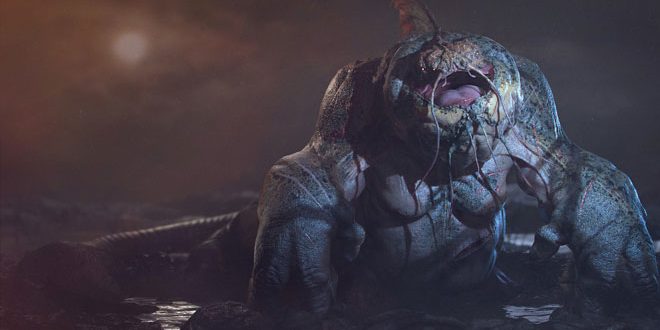 VICK GAZA is a Character Artist at Guerrilla Games from Amsterdam, Netherlands. In this post you will see Blurgha – The Beast – Realtime model by Vick Gaza. This piece started for the Beast Challenge hosted on Polycount by Allegorithmic. Vick’s attempt was to bring a creature from concept stage all the way to production level and test out Substance Painter`s baking and procedural texturing capabilities on dense meshes with multiple UDIM’s. The mesh has about 100k triangles, re-topologised for animation with proper UVs, spread on 4 UDIMs at 4k texture-set each. He used Zbrush for concept and sculpt, Topogun for retopo, Maya for mesh cleanup and UV`s and Substance Painter for Bake/Texture. Rendered in Marmoset 3 Beta.

Played with shadows to wrap on the body as much as possible and show form better.

Sparks because Witcher ! There`s not much sense to the sparks but wanted to make a witcher-esque render.

A bit of a different light setup to cast the mouth in shadow.

The prettiest monsters have curves 😉

Black and white variation of a previous render for fun.

Playing with a 5×7 photo crop for fun