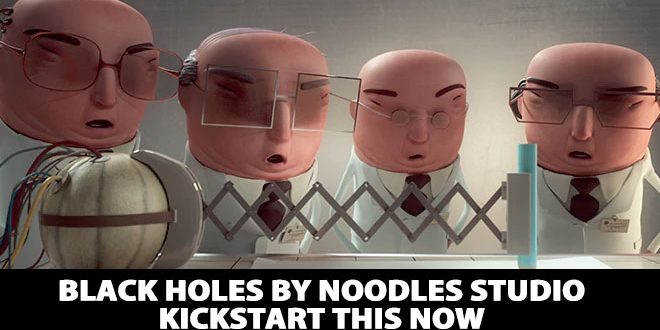 Black Holes is a satirical animated series about space conquest, the meaning of life and proctology. It chronicles the journey of Dave The Astronaut and his partner, an intelligent melon, as they embark on the first ever human mission to Mars.

Noodle Studio made a 12 minutes proof of concept in their garage and got selected at Sundance Film Festival. They wrote the 1st seaon of Black Holes and just launched a Kickstarter campaign to finish the development and produce the actual 22 minutes pilot with the support of the audience, in order to keep their independence and creative freedom. Noodles Studio brings Black Holes to Kickstarter to fund the production of the first season, a total of 10 x 22 min. episodes. Their initial funding goal of $100,000 will allow them to develop, produce and release the first episode of Black Holes. This includes script writing, graphic research, animation tests and actual production. Every additional 100K from then on will allow them to produce a new episode. The campaign runs until March 28.

The video shows the creator and CG artist David Nicolas, sculpting and modeling a wicked Alien with ZBrush.